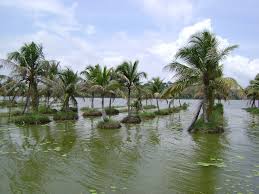 What is Unique About Vellayani Lake

The unique thing about Vellayani lake is that a road passes through the lake and a bund has been built for this reason. This 750-hectare water body has been bifurcated by a road - truly a sight to see!
During Onam, the boat race is an interesting feature of this lake. It attracts a large crowd from far and near. From Kovalam beach, country boat services are available for reaching the lake. 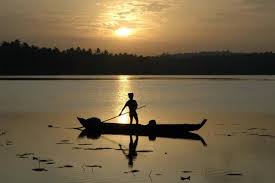 The lake is under threat because of illegal mining, water pollution, encroachment and land reclamation. Many a times, there have been moves to drain the lake too and utilize this reclaimed region for agriculture. However, intervention by local people and environmentalists saved the lake and the idea lies shelved.

Fish culture by Fisheries department has affected natural biota of Vellayani lake and aided in pollution of the lake. Water samples from Vellayani lake have shown high iron content, ammonia and e-coli bacteria. The lake has also been polluted by runoff from agricultural lands in nearby region. Management and protection measures must be improved and pollution from agricultural and urban sources must be stopped.

The Kerala Agricultural University has planned to provide bio-fencing, weeds control and promotion of lotus cultivation in the lake. Water Resources Department has been entrusted with task of de-silting the lake, look into conservation of feeder canals and strengthen bunds.

Other Places near Vellayani Lake

The region around Vellayani lake is very picturesque. There is a 700 years old temple of Lord Kali at Vellayani. It is famous as Vellayani Devi temple. You will be surprised to know that a non-pilgrimage festival was celebrated in the temple which went on for 50 days at a stretch! The festival is 'kaliyoottu Mahotsavam' and it is held once in three years. 'Kali Mahotsavam' literally means 'the festival when devotees will feed the Devi'.

Two pilgrim centres near Vellayani lake are Vellayani Vishnu temple and Vellayani Devi temple.
Kovalam Beach is 16 kms. from Thiruvananthapur. It is a place to witness nature at its best!
CVN Kalari Sangham is an cultural institution established in 1856. It seeks to revive the dying art of Kalarippayattu --- traditional martial art of Kerala.

Maharaja Swathi Thirunal Palace is the palace of Maharaja of the state of Travancore. The Maharaja loved music and encouraged Carnatic music as well as Hindustani music. He introduced modern medicine in his state and was instrumental in starting the Government press, Trivandrum zoo and museum. 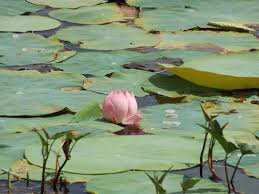 Vellayani Lake - Revisiting the Past

Earlier, in 1953, the lake was used for growing lotus flowers for Padmanabha Swamy temple. When the 'Grow more Food' programme was launched by the government in 1950's, large tracts of land were reclaimed for cultivation.

The lake is de-watered twice in a year for paddy cultivation by farmers. There is scarcity of water in neighbouring panchayats of Vellayani and Thiruvananthapuram and water reaches the population residing here by tankers. These panchayats include Thiruvallam, Kalliyoor, Nemom, Venganoor and Kovalam. 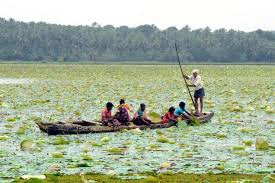 Many ways of conservation of the lake have been suggested by various environmental organizations and local populace. Some of these methods have been mentioned below -


Distance from Other places

Well, still there is hope. The lake can be saved and the spot will attract more and more tourists as it has been doing for many years now. Organic farming in adjoining areas and Eco-tourism are ways in which Vellayni lake can be redeemed of its original sheen!