Varkala is fast emerging as an alternative beach destination to Kovalam. Situated 50 km away from Thiruvananthapuram, it promises visitors miles of sandy beaches, cultural attractions and ayurvedic centres.

Papanasam Beach, Varkala’s main beach, is the place to head to in the evenings. Visitors can enjoy the balmy breezes blowing in from the Arabian Sea and the spectacular sunsets. The waters close to the shore are believed to be medicinal and attract many bathers. Ayurvedic treatment centres also dot the beach and offer the usual set of treatments. Thiruvambadi Beach and Odayam Beach, 1 km away, are also popular with tourists. A black sand beach promises more novelty. Paragliding is a popular activity at these beaches.

Varkala is also famous for its sedimentary cliffs, found nowhere else in Kerala. Adjacent to the Arabian Sea, they belong to the Cenozoic era and have been declared a natural heritage monument by the Geological Survey of India. Geologists call them the Varkala Formation.

The Janardhana Swami Temple attracts many devotees in what was originally a temple town and was known as Dakshin Kashi. The 2,000-year-old temple possesses an ancient bell said to have been gifted by Dutch sailors. Dedicated to an incarnation of Vishnu, the deity’s right hand is raised towards its mouth and legend has it that when the hand appears near the mouth the world will end. Rituals to departed souls are also conducted here once their ashes have been immersed in the sea. A festival is held here every March. 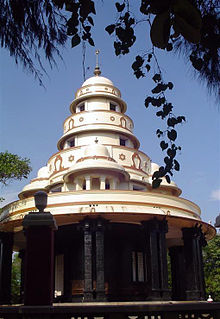 The hill top mausoleum of Sree Narayana Guru also attracts people. Located within the Sivagiri Mutt, this is where the guru’s devotees come to pay homage. Sree Narayana Guru revolutionized early 20th century Kerala society with his message of “One caste, One religion one God”.

The Varkala Tunnel is an off-the-beaten-path attraction. Built in 1867 by the British at the request of Sir Madhava Rao, Dewan of Travancore, it connects the backwaters from Varkala to Thiruvananthapuram and was used to transport goods and people. The 55-km-long tunnel, which passes under the cliffs, fell into disuse with the improvement of roads and railways in the past many decades but has been revived recently to ferry tourists who come to marvel at the engineering of the past.

Anjengo Fort near Varkala was built by the British in 1684 after they had wrested the settlement from the Portuguese. Students of history can browse through the cemetery within the fort while nature lovers can marvel at the Muthalapuzhi Lake close by. There is also a lighthouse close by.

Edava is another promising beach destination near Varkala. This fishing village has been historically important for it role during colonial times and for the fact that the first printing press in erstwhile Travancore was established here. Today it is known for its communal harmony and its golden beaches and serene backwaters, Kappil Beach and Edava-Nadayara Lake.

Other attractions close to Varkala are the Sarkara Devi Temple, the Kaduvayil Juma Masjid, Attingal and Kilimanoor.