Thiruvananthapuram occupies a prominent spot on the itinerary of visitors to Kerala, given its background as a heritage city. For many tourists it is, in fact, the springboard from which to explore the rest of the state. Apart from its attractive beaches, the city boasts many historic buildings and museums that make it a tourist’s delight along with the languid pace of life in the city.

Tourists and travelers can spend many engaging days in the capital experiencing a host of sights and sounds. Society here is by and large traditional and visitors can get a peek into their unique way of life. They will be greeted by a green and neat city which is rapidly modernizing. 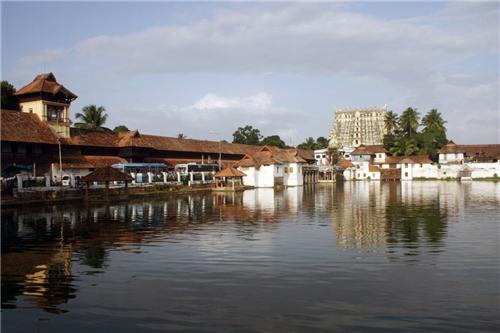 A major attraction in the heart of Thiruvananthapuram, it houses the presiding deity of the city and of the royal House of Travancore. The main idol is that of Lord Vishnu reclining on the serpent Anantha in the yoga nidra posture. The current head of the House of Travancore is the chief custodian of the Sree Padmanabhaswamy Temple. It is located within the walls of the city’s old fort called East Fort. Only Hindus are allowed inside the temple and have to follow a dress code.

The presence of the temple makes Thiruvananthapuram a divya desam, one of the 108 abodes of Vishnu. The temple is dominated by a 100-foot seven-tiered gopuram. By its side is a tank called the Padma Theertam. A corridor with 365 pillars lead to the sanctum sanctorum. The idol inside is made of 12,000 saligramas, a fossil found on the banks of the Gandaki river in Nepal, and covered with a special plaster made with ayurvedic herbs. It rests on a platform carved out of single stone. The five hoods of Anantha face inwards to signify contemplation. The sanctum sanctorum has three doors through which the deity can be seen by devotees. 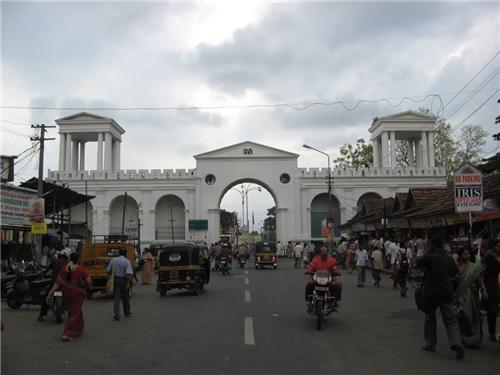 Situated in the center of Thiruvananthapuram, East Fort once contained the old city within its walls. It is so called because of its majestic white main entrance. Today, this is the very heart of the city with the iconic temple, many heritage building and business establishments all around. The main railways station and bus depot are a short walk away.

The main attraction within East Fort is the Sree Padmanabhaswamy Temple. Other attractions inside and outside are the Kuthira Malika Palace, Pazhavangadi Ganesha Temple, Rangavilasom, Gandhi Park and Chalai Bazaar.

Its unique architecture is a mixture of Indian and Gothic styles. The museum houses a collection of rare artefacts including bronze idols, temple ornaments ivory carvings and paintings. It also has the Sree Chithra Art Gallery and a zoo within its premises. The zoo served as inspiration for Yann Martel, author of the bestselling Life of Pi. 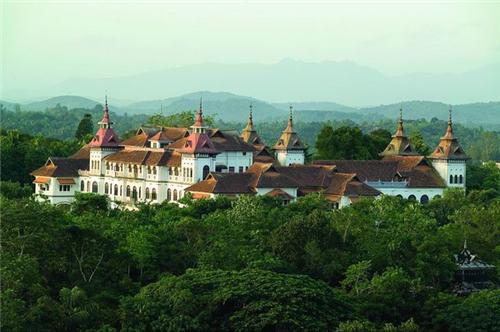 A Thiruvananthapuram landmark, the imposing Kowdiar Palace was built in 1915 in the traditional Kerala style by Sree Moolam Thirunal. The last Maharaja of Travancore, Sree Chitira Tirunal Balarama Varma, is buried within its premises. The current members of the erstwhile royal family continue to occupy the palace and it is not open to the public.

Created entirely out of wood in the traditional Kerala style, the Padmanabhapuram Palace was originally built at the beginning of the17th century by the rulers of Venad. It is located within a fort in Kanyakumari district, about 50 km from Thiruvananathapuram. The palace was rebuilt in 1750 by rulers of Travancore, who inherited it and lived here before moving to Thiruvananathapuram in 1795. The palace complex consists of many structures with interesting features. It also has a secret passage which the members of the royal family could use to escape. 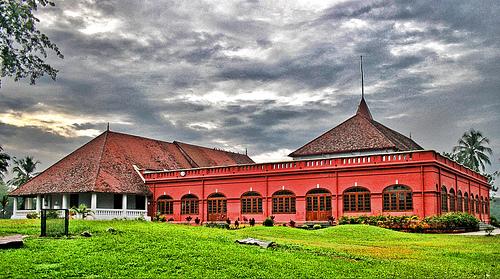 This is where many cultural performances take place in Thiruvananthapuram. The Nishagandhi Dance Festival, which showcases various dance forms from all over India, is held here every year in January and organised by the Tourism Development Corporation. Close to the Napier Museum, it once served to house the guests of the royal family.

Close to the Sree Padmanabhaswamy Temple, Attukal Bhagavathy Temple is famous for the Attukal Pongala festival held every January. Some 2.5 million women devotees gather here from early in the morning and prepare an offering made out of rice, jaggery, coconut and banana for the goddess who is an incarnation of Parvati. The event takes place in a radius of 5km around the temple. 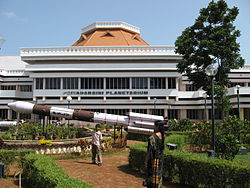 The Kerala Science & Technology Museum was established in 1984 to promote understanding of science and technology. Its ten galleries display more than 300 exhibits related to various scientific and engineering disciplines including mathematics, computer science, solar energy and electronics. The museum regularly organizes workshops for school children. The Priyadarshini Planetarium is attached to the museum and possesses an 11-inch telescope for night sky observation.

The Chacha Nehru Children’s Museum in Thiruvanthapuram displays a vast collection of dolls, stamps and masks from all over India and the world. Children visiting the museum can also enjoy a mini aquarium and first issues of children’s magazines in Malayalam.

Established in 1956, CVN Kalari Sangham is devoted to promoting training in kalaripayattu, Kerala’s ancient martial art. Students undergo intense training in the various techniques and are imparted additional information in associated rituals and ayurvedic treatment. The training happens in a traditional gymnasium ambience and visitors are allowed to witness performances.

About 16 km from the heart of Thiruvananthapuram, Kovalam is popular for its beaches. While Lighthouse Beach and Eve’s Beach are thronged by tourists, Samudra Beach is largely occupied by local fishermen going about their business. Many resorts and hotels here make it one of India’s most popular beach resorts.

The largest freshwater lake in the area, Vellayani lake is popular for its scenic beauty, serenity and crystal clear water. It is located 9 km from the heart of Thiruvananthapuram. During Onam, snake boat races are held here.

On the shores of a placid palm fringed lake, the Veli Tourist Village with its many attractions for young and old is an ideal getaway for the day. The area is dotted with giant sculptures set in landscaped gardens and also offers facilities for boating and swimming. Visitors can go across a floating bridge to view the splendid sunsets at the adjoining Sanghumukham Beach. The largest freshwater lake in the area, Vellayani lake is popular for its scenic beauty, serenity and crystal clear water. It is located 9 km from the heart of Thiruvananthapuram. During Onam, snake boat races are held here. 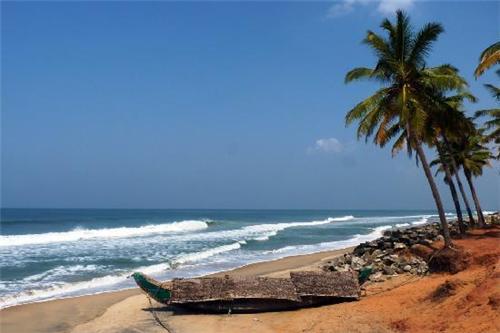 Popular for its sandy beaches and sedimentary cliffs, Varkala is about 50 km away from Thiruvananthapuram. The Janardhana Swami Temple on Papanasam Beach and the hill top mausoleum of Sree Narayana Guru also attract many people. Another attraction is the ayurvedic treatment centres here.

Famed for its cool weather and scenic beauty, Ponmudi is located at an altitude of 1,100 metres and is a mere 61 km from Thiruvananthapuram. The hill station is reached by a long winding road with 22 hairpin bends. Many tea gardens add to the area’s beauty. Notable attractions here include Golden Valley, Echo Point, Deer Park, Agasthyakoodam Peak, Meenmutty Falls and Peppara Wildlife Sanctuary. 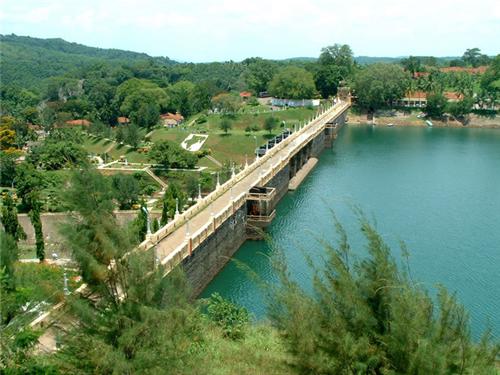 Home to 39 species of mammals, 176 species of birds and 30 species of reptiles, the Neyyar Wildlife Sanctuary is a popular getaway from Thiruvananthapuram. It is also home to elephant, deer and crocodile rehabilitation centres. About 40 km from the city, it is in the lap of the Western Ghats and visitors can enjoy the weather and scenic vistas. The Agasthyakoodam Peak is close by.

The best time to visit Thiruvananthapuram is from October to Match. Summers are very hot and humid here while the rains are torrential during the monsoon season. Kerala’s most popular festival, Onam, is celebrated during August-September and many visitors like to make it a part of their visit. New Year’s celebrations at the various beach resorts are also popular with visitors.

Thiruvananthapuram is well connected with buses, autos and taxis. Kerala State Road Transport Corporation (KSRTC) buses ply throughout the city transporting thousands of passengers from one end of the city to another all day. While buses are generally crowded they are the cheapest mode of transport within the city. KSRTC also operates air conditioned coaches for the comfort and convenience of its passengers, though at higher fares. Private bus services are also available and can be availed of at the very same stops. The city’s central bus terminus is close to East Fort. A monorail system has been proposed for Thiruvananthapuram to make travelling easier.

Many places of interest around Thiruvananthapuram make it easy to get away from the city for a weekend of leisure. These include Ponmudi, Varkala, Kanyakumari, Allapuzha, Thekkady, Kollam, Kottayam, Kumarakom, Mavelikara and Kochi.

For more information and tips about visiting Thiruvananthapuram visitors can contact: