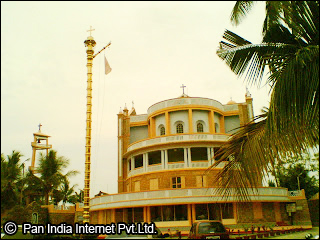 St. Mary's Malankara Syrian Catholic Cathedral Basilica also known as St Mary's Cathedral is a holy shrine which is located in between Pattom and Kesavadasapuram in Thiruvananthapuram district. This is one among the ancient churches which is being managed by the Malankara Roman Catholic management. The premises of the church harbor the Seminary, the St. Mary's Press and the educational institutions of the Malankara management. This is continuing to be the central place of worship for Syro-Malankara Catholic Church.

In 1950, Mar Ivanios who was the Servant of Metropolitan God Archbishop laid the foundation stone of St Mary's Cathedral. On 22nd February, 1965, Archbishop Benedict Mar Gregorios consecrated the Cathedral. At present, the community of the Cathedral parish is consisting of 531 families. The pro-Cathedral of the Major Archdiocese St. Mary's Church at Palayam was elevated to the position of the first Basilica in the Malankara Catholic Church.

In the year 2008, the cathedral was renovated. On 8th November, 2008 was the blessing of the renovated Cathedral.

Moran Mor Baselios Cleemis who was the Major Archbishop made a proclamation in St. Mary's Pattom Cathedral on 14th July, 2007. Mar Ivanios was raised to the level of 'Servant of God' known as Daivadasan through this proclamation. This is the first step in the process of his Canonization as a Saint in the Universal Church.