Sree Padmanabhaswamy Temple in the heart of Thiruvananthapuram, inside the landmark East Fort, houses the presiding deity of the city and of the erstwhile House of Travancore. The temple's main idol is that of Lord Padmanabha, a form of Vishnu, reclining on the serpent Anantha in the yoga nidra posture. The temple is located within the walls of the city’s old fort called East Fort and is a combination of classical Dravidian type of temple architecture with the typical Kerala style of architecture. 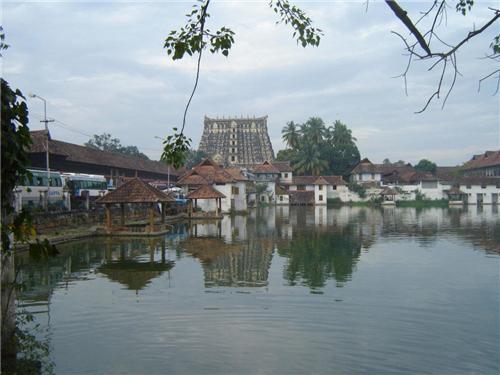 Legend has it that the temple has been here even before the founding of Thiruvananthapuram, with many references to it in the Puranas attesting to its age and sanctity. It is believed that the deity appeared as a vision to a Brahmin after he had meditated on Vishnu and it was so large that it stretched from Thiruvallam to Trippapur, a distance of five miles. The Brahmin prayed that Vishnu should reduce his image so that he could see him all at once. That’s how the present image of the idol in the temple took its form. The presence of the temple makes Thiruvananthapuram a divya desam, one of the 108 abodes of Vishnu.

The temple is dominated by a 100-foot, seven-tiered gopuram built in 1566. Its silhouette is boat-shaped and is symbolic of a vessel into which offerings to the lord are placed. By its side is a tank called the Padma Theertam. A corridor with 365 magnificent carved pillars, created by 4,000 sculptors, leads to the sanctum sanctorum. The idol inside is made of more than 12,000 saligramas, a fossil found on the banks of the Gandaki river in Nepal, and covered with a special plaster made with ayurvedic herbs. 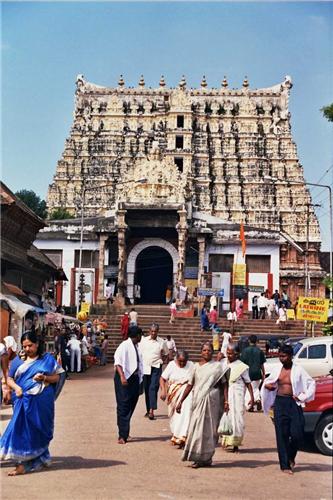 It is 18-feet-long and rests on a platform carved out of single stone with its hand on a lingam, Brahma emerging on a lotus out of its navel and the two consorts of Vishnu – Lakshmi and Bhudevi by its side. The five hoods of Anantha face inwards to signify contemplation. The present image replaced an original wooden idol in 1732. A platform in front, called the ottakal madapam, is the one upon which the head of the House of Travancore, prostrates himself before the deity. The sanctum sanctorum has three doors through which the deity three different parts of the deity are visible to devotees.

The temple is also home to the biggest mural in Kerala and depicts the ananthasayam. Another structure of note within the temple is the splendid Kulashekara Mandapam. It is supported by 28 carved pillars, with the ones in the four corners producing musical notes when tapped. Two other shrines dedicated to Sree Ugra Narasimha, another incarnation of Vishnu, and to Sree Krishna also exist within the temple. The temple has undergone many renovations over the centuries, each adding more structures and beauty to the temple complex.

The chief custodian of the Sree Padmanabhaswamy Temple is the current head of the House of Travancore. It was in 1750 that the then maharaja Marthanda Varma gave up his crown to Lord Padmanabha and took a pledge to henceforth rule in the name of the deity only as Padmanabhadasa, the ‘servant of Lord Padmanabha.’ All the emblems of state – the crown, umbrella, fly whisks and sword were given into the custody of the temple and, thereafter, the welfare of the temple and its priests has chiefly been in the hands of the members of the House of Travancore. Over the years, thousands of gifts from the rulers and temples around were accumulated at the temple and it was this hoard of treasure that was discovered in 2011 secreted in vaults below the sanctum sanctorum. An important day in the temple’s calendar is the Aarat of Padmanabhaswamy Temple, a festival in which the temple deities are taken in procession to Sanghumukham Beach for immersion in the sea and brought back. The idols are escorted by the current head of the House of Travancore. Other temple festivals include Alpashy, Panguni, Navaratri and Laksha Deepam.

This temple has also gone down in the history of social reform in India. It was in 1936 during the reign of Maharaja Sree Chithira Thirunal that it was opened, for the first time in the country, to the so called untouchables. Many other temples in the country followed suit striking a blow for the eradication of untouchability from Hindu society.

Location: Inside East Fort on M.G. Road.
How to Get There: The temple is close to the Central Bus Depot and Central Railway Station.
Timings: 3.30 am – 7.20 pm.
Restrictions: Entry for Hindus only with dress code. Men have to wear dhoti with or without angavastram and women have to wear sarees or dhoti. Photography and videography are prohibited inside the temple.