Traditional Carnatic music holds centrestage in Thiruvananthapuram with the Swathi Thirunal College of Music at the forefront of music centre. Hindustani and Western music also have their aficionados in the city. Thiruvananthapuram saw its heyday as a centre of music during the reign of Maharaja Swati Thirunal, a patron of the arts and a great composer himself.

The Swati Sangeethotsavan, held every year in the honour of Maharaja Swati Thirunal, at the Kuthira Mallika Palace, is the city’s premier musical event. It is exclusively devoted to Swati Thirunal’s compositions and goes on for a week. The festival is organized under the auspices of the Maharaja of Travancore Trust and is open to all music lovers. The Navaratri festival at the Sree Padmanabhaswamy Temple also sees many renowned musicians from all over the country performing to an eager audience as does the Soorya Dance and Music Festival. Tke Chembai Music Festival, held every year for Ekadasi, also attracts many enthusiasts. 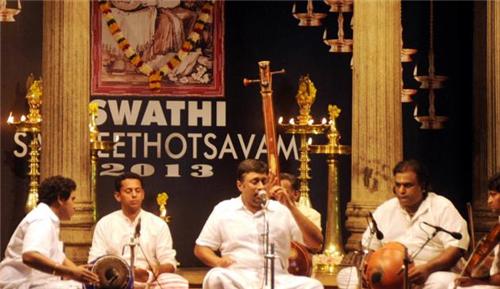 Established in 1939, the Swati Thirunal College of Music in Thampanoor makes sure the great composer’s legacy endures and is carried forward. It popularizes his kirtis and trains musicians to play them.

All India Radio in Thiruvanathapuram has also played its part in keeping alive classical music traditions in the city by giving them air time and also employing musicians.

Technopark regularly hosts western music shows which sees musicians from all over the country perform for fans to get their fill of their favourite music.

Aathira Krishna, born in Thiruvanathapuram, is the granddaughter of renowned musician Gopala Pillai and has been hailed as a violin prodigy and has been performing all over the world since the age of 9. The initial training was with her grandfather himself. She is a virtuoso who blends western influences with Indian classical techniques. Athira has been the recipient of many awards for her skill. She is mentioned in the Guinness Book of World Records for her non-stop 32-hour Carnatic solo violin performance.

K S Chitra, hailing from Thiruvanathapuram, is a well-known playback singer who has sung in Malayalam, Kannada, Tamil, Telugu, Hindi, Oriya, Assamese and other languages and has recorded over 20,000 songs in a career spanning 30 years. She has been honoured with film awards in all the southern states.

Hariharan, one of the pair which formed the popular fusion music band Colonial Cousins, was born in Thiruvananthapuram in 1955. He is a virtuoso musician who has mastered both Carnatic and Hindustani music, recording many Bollywood and Tollywood hits. Hariharan was awarded the Padmashri in 2004.

M G Radhakrishanan was another successful musician who made his presence felt in the Malayalam film industry. A product of the Swati Thirunal Music Academy, he was a playback singer, music director and composer of songs for Malayalam films and had worked with All India Radio in Thiruvanathapuram.

N Vasudevan was a Carnatic vocalist who was with All India Radio for 26 years. He was also a product of the Swati Thirunal Music Academy and a resident of Neyyatinkkara, a suburb of Thiruvananthapuram. A Padmasree awardeee he was disciple of Semmangudi Srinivasa Iyer and Ramnad Krishnan.


Explore more about Culture of Thiruvananthapuram