The most famous beach resort in Kerala, Kovalam is about 16 km from the heart of Thiruvananthapuram. Popular for its dark sandy beaches, its proximity to the city makes it a favourite weekend destination. Many resorts and hotels here cater to hordes of tourists from all over India and abroad. Kovalam is a popular destination for New Year’s parties.

Kovalam in Malayalam means “a grove of coconut trees” and true to its name, the place abounds in hundred coconut trees stretching away to the horizon. Marked by a massive rocky promontory at one end, Kovalam is washed by the blue waters of the Arabian Sea on one side and has the Western Ghats rising on the other, making it an ideal destination for rest and recreation. 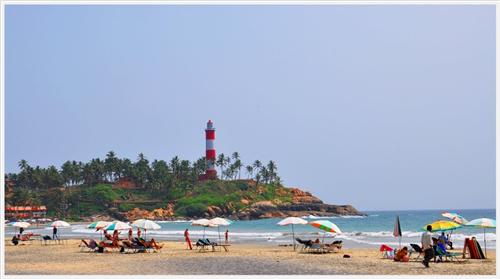 Once a tranquil fishing village, the resort first came into prominence in the 1920s when Maharani Sethu Lakshmi Bayi of Travancore built her seaside residence, Halcyon Castle. Gradually Kovalam became popular with European visitors to the court of Travancore and later with hippy travellers in the 1960s and 70s. Tourists from all over India began to make a beeline for it in the 1980s and 90s, giving it the tag of Kerala’s most popular resort. The sands of Kovalam are darker in colour due to the presence of minerals such as ilmenite and monazite.

Kovalam’s main beaches on its 17 km coastline include Lighthouse Beach, Eve’s Beach and Samudra Beach. While the first two are thronged by tourists, the third is largely occupied by local fishermen going about their business. Lighthouse Beach gets its name from the old Vizhinjam Lighthouse at the spot. Eve’s Beach is known for its tranquil bay, especially during moonlit nights. Another beach in the northern extremity of Kovalam, Ashoka Beach, is still largely untouched by tourism. 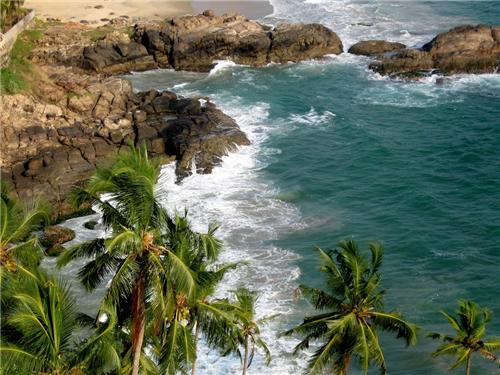 A number of resorts and hotels, from five-start to budget options, have come up in the vicinity of Kovalam today. Most popular are the ayurvedic resorts which cater to health and wellness. Many beachside shacks offer curious and souvenirs to take back home. Restaurants of all kinds cater to every palate, with seafood and fresh fruit being most popular. Convention facilities at the big hotels lure many visitors who would like to combine business with pleasure in enchanting surroundings.

Surfing is a popular activity at Kovalam and there are surfboards available on hire. Parasailing and catamaran riding are other popular activities apart from sun bathing and swimming.

Vizhinjam, 3 km away from Kovalam, is a port and fishing village. It boasts a state-of-the-art harbour and has a plant which converts wave energy into electricity. Vizhinjam was once capital of the Ay Dynasty and is today known for its cave temples, church and mosque. Archaeological remains here point to the area’s once flourishing trade with the Roman empire.