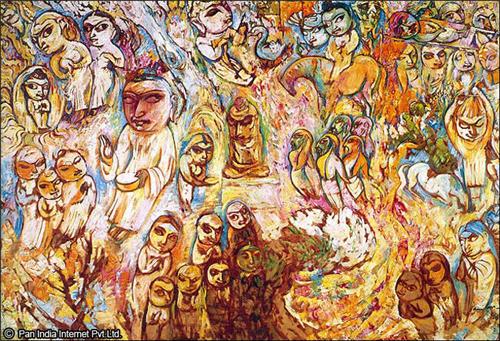 KCS Panicker Art Gallery is a very rare collection of paintings and sculptures. This art gallery is located in the auditorium of the Napier museum office. This museum gallery was established in 1979 in the memory of K.C.S. Panicker (1911 - 1977) who was a versatile painter who was nominated as one of the nine eminent Artists of the country by the Government of India in 1954. The paintings are displayed in chronological order which reflect the journey of Panicker as an artist and an individual. An impressive collection of about 75 paintings and four bronzes which cover a period of 40 years that shows constant creativity is housed in the Museum of Trivandrum at the Panicker Gallery. Each picture brings the men together and all of them as a whole will set to make a life lived through complete honesty.

K. C. S. Panicker was one of the best metaphysical and abstract painters in India who was instrumental in setting up the Progressive Painters Association in Madras from 1944 to 1953. In 1976, he was awarded the highest award of the Lalit Kala Academy, India's National Academy of Art and the Fellow of the Lalit Kala Academy for lifetime contribution. He became the Principal of the Government College of Fine Arts, Chennai, in 1957, and in 1966 formed the Cholamandal Artists' Village, 9 km from Chennai, along with his students and a few fellow artists. KCS Panicker is considered as one among the leading figures in Madras Art Movement.

The gallery has an exclusive collection that traces work of Panicker over a period of time which was displayed in art galleries across the world. The paintings that are in the museum give an indication of the way which delighted Panicker during the mood and memory of places. Paintings belonging to one of the best works of the artist, 'Words and Symbols' which was internationally acclaimed are also displayed inside the gallery. His creations on display induce tremendous amount of inquisitiveness in the mind of visitors who venture into their interpretation.

The world of "Words and Symbols" is a very daring conception in contemporary art. Panicker, in these pictures, visualized immense arrays of forms of life coming together in a design of great grandeur and mystery. With a vision as large as that, minutely strict and yet so sensitive in its comprehension, Panicker makes the group and figure for an uncommon beauty. The illusion of space, of light and color in his early water colors, the emotion and pain of his figures and groups he dispels as he searches in these great pictures for the "word" that can inwardly assure and give peace. It is really a tribute to the great painter to harbor an amazing collection of his works left behind by him and gifted by his family under one roof. This gallery also includes an oil-on-canvas ‘Dog’ series of the year 1973 which was done by Panicker inspired from palm-leaf manuscripts done in the last years of his life.

K C S Panicker Art Gallery was remaining closed for renovation and was re-opened after about a year. Many of the paintings of Sixty-five of the artists have undergone restoration and now hanged in new teak wood frames. Wooden floor panels and a railing have been constructed to keep their distance from the works. Air-conditioning, ultra-violet-free LED lights and Hygro thermometers have been set-up to measure temperature and humidity of the gallery. Cushioned stools have been placing which allow viewers to sit and ponder for hours over some of Panicker’s more haunting works. The gallery was reopened by M K Narayanan, West Bengal Governor. K N Vasudevan Namboodiri, Kanayi Kunhiraman, Kattoor Narayana Pillai, Akitham Narayanan and Paris Viswanathan who were students of Paniker also attended the event. Chief Minister Oommen Chandy, Minister P K Jayalakshmi and filmmaker Adoor Gopalakrishnan were also present.