Founded in the 1960s, with the advent of space exploration and scientific investigation of the atmosphere, ISRO or the Indian Space Research Organization in full stands testament to the vision of one of the greatest minds of our era, Dr. Vikram Sarabhai, who believed that the exploration of space and the technology that would result from it could help in the development of the nation. Today ISRO is India’s premier space research agency and comes under direct control of the department of space, Government of India and is also one of the largest Government funded space agencies in the world. With space exploration and the development of indigenous satellites and satellite launching systems as its primary objectives, the agency has gone from strength to strength over the years launching India’s first satellite, Aryabhatta on April 19, 1975, and in 1980 launching the satellite Rohini.

Since the ISRO has further developed various other rockets to launch satellites including the Polar Satellite Launch Vehicle (PSLV) and the Geosynchronous Satellite Launch Vehicle used to place satellites in geostationary orbit. In 2008, with the launch of the Chandrayaan - 1 lunar probe developed by the agency, India sent its first mission to the moon and in 2013 launched its Mars Orbiter Mission. ISRO also cooperates with several international agencies through various multilateral agreements and the 2014 launch of 5 satellites for foreign nations by the PSLV developed by it gave India the chance to exhibit its technological prowess. Well-funded, with a budget of U.S. $ 1.1 billion and Dr. K. Radhakrishnan as the Chairman, the agency has many centres across the country of which one of the main centers is the Vikram Sarabhai Space Centre in Thiruvananthapuram. 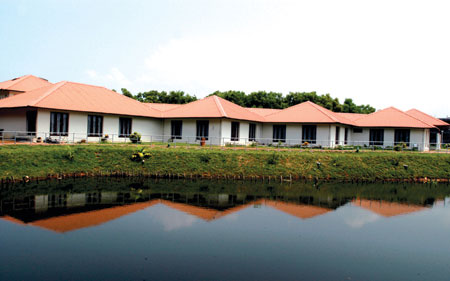 The Vikram Sarabhai Space Centre in Thiruvananthapuram is ISRO’s largest facility and also one of its main design research and development centers. VSCC traces its origins back to the Thumba Equatorial Launching Station which was set up in 1962, but was renamed the Vikram Sarabhai Space Center in honour of Dr. Vikram Sarabhai after his sudden death on December 30, 1971. It is mainly a design and development center for satellite launch vehicles and other related technologies, sounding rockets, the Rohini and Menaka launchers and the ASLV, GSLV, PSLV and GSLV MkII rockets.

It also carries out research in other areas such as avionics, control guidance, aeronautics, computer and information technology, composites, mechanical engineering, vehicle integration, testing of polymers and etc which, in part, act as ancillary support systems supporting the main project objectives of ISRO.

The centre is also dependent on the support of various auxiliary and administrative services. VSCC is an ISO 9001: 2000 certified agency and aims at improving continuously in various fields to achieve zero defects, its official quality policy being the achievement of excellence in launch vehicle technology. It also has, on its payroll, a formidable workforce consisting of approximately 4500 employees, mostly scientists with specialization in different disciplines. VSCC has, other than the main campus at Thumba, facilities for the development of reinforced plastics and composites located at Vattiyoorkavu, a plant in Aluva which produces ammonium perchlorate on an experimental basis. This ammonium perchlorate is a vital part of solid propellant motors developed by ISRO.

One of the many fields that the agency carries on fundamental research in is space physics at the Space Physics Laboratory. The field of space physics is expansive and includes atmospheric dynamics, atmospheric aerosols, the chemistry of radiation etc. The Space Physics Laboratory is an integral part of the Vikram Sarabhai Space Centre Campus along with the Thumba Equatorial Rocket Launching Station (TERLS) which was picked as a launch site for sounding rockets due to its location on the Geomagnetic Equator. There have been approximately 2200 sounding rockets that have been launched from the Thumba Equatorial rocket launching station including Arcas - I , Arcas - II, Dragon - I, Menaka - I and Nike Tomahawk including others.

From the year 1970 to 1973 the USSR launched approximately 1161 sounding rockets called M - 100 from TERLS launching about one rocket a week. TERLS was dedicated by then Prime Minister of India Mrs. Indira Gandhi on February 2, 1968 to the United Nations and though there was no funding offered by the U.N. , scientists from various nations including France, Germany, Japan and the U.S.A. used and continue using the facilities at VSSC to conduct rocket based experiments. 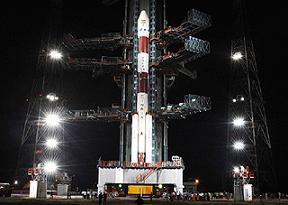 The development of indigenous rocket launching vehicles and sounding rockets is another area of core focus at the Vikram Sarabhai Space Centre. India’s first indigenously developed sounding satellite; RH-75 was developed here and launched from TERLS.

Over time the agency has developed and operationalized a series of rockets under the family name Rohini Sounding Rockets which serve a host of scientific purposes from research in meteorology to studying upper atmospheric processes upto an altitude of 500 km. The Rohini Sounding Rockets currently in operation are RH-200, RH-300 and RH-560. The first successful launch vehicle flight took place in 1980 following the culmination of the SLV-3 programme, which after the planned four flights of the SLV-3 launch vehicle out of which only two were successful, was shut down.

After this the Augmented Satellite Launch Vehicle was developed as a 5 -stage solid propellant rocket and tested in 1987, 1988, 1992 and 1994 after which it was decommissioned. At the same time, however, the Polar Satellite Launch Vehicle or PSLV was also being developed and was tested in 1993 for the first time. This PSLV has proven to be India’s most reliable and versatile launch vehicle with a successful launch rate of 96% having launched 30 Indian and 35 foreign satellites into orbit.

Although initially developed to launch India’s Remote Sensing Satellites into Sun Synchronous Orbit, it can also be used to launch smaller satellites into Geosynchronous Transfer Orbit. The Geosynchronous Satellite Launch Vehicle or GSLV marked the use of indigenously developed cryogenic engines for the first time making India only the 6th country in the world to have this technology. The GSLV is currently ISRO’s heaviest satellite launch vehicle and is capable of delivering a payload of 5 tonnes into Low Earth Orbit.

Amongst the various satellites launched into orbit by ISRO are the INSAT series of satellites for the purpose of Broadcasting media, telephonic communications and internet, weather forecasting and missions requiring search and rescue contact, the IRS series of satellites which provide remote sensing services to the country, Radar Imaging satellites and India’s first dedicated meteorological satellite Kalpana -1 named in honour of Kalpana Chawla, an astronaut of Indian origin. It has also launched satellites for the purpose of GPS - aided geo-augmented navigation. 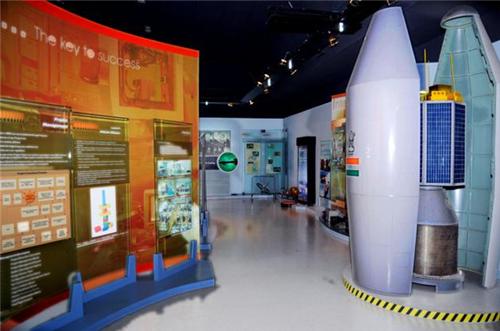 In the years to come, ISRO plans to expand its fleet of launch vehicles with the addition of the new GSLV Mk-III which at 640 tonnes will be the heaviest rocket ever built by India and the Reusable Launch Vehicle - Technology Demonstrator (RLV-TD).

ISRO also plans to undertake the development of new spacecraft and also send unmanned missions to the Moon, Mars and Venus with a total of 58 missions planned up to the year 2017 at a cost of approximately U.S. $ 3 billion and carry out a mission to the sun by the year 2016. The agency has from the time of its creation continually been at the forefront of Asian space exploration leading the way in space research and using the technology that it develops to benefit the nation.