Located in the heart of downtown Thiruvananthapuram, East Fort once enclosed the city within its walls. It is named after the main eastern entrance of the fort. This is the centre of the city, filled with bustling activity from dawn till dusk. It abounds with attractions in and around including the Sree Padmanabhaswamy Temple, Kuthira Malika Palace, Pazhavangadi Ganesha Temple, Rangavilasom, Gandhi Park and Chalai Bazaar. Such is its importance in the city, that East Fort has its own police station and post office. 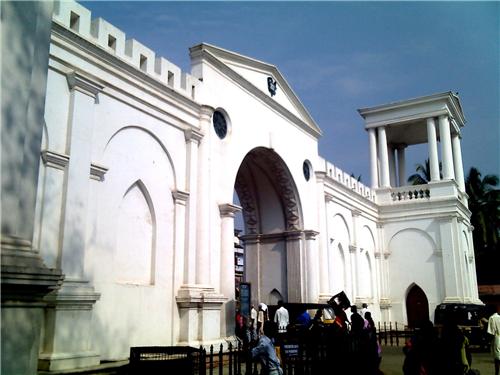 The main attraction within East Fort is the Sree Padmanabhaswamy Temple.


The Kuthira Malika Palace was once the residence of the rulers of Travancore. Built by Maharaja Swati Tirunal in the 1840s, it consists of a number of buildings in the traditional Kerala style with sloping tiled roofs, carved wooden pillars and courtyards. It gets its name from the 122 carved horse brackets which support the southern part of the roof. The palace was built in four years by 5,000 workmen and displays many traditional features from weather conditioning to acoustics. Twenty of the palace’s 80 rooms are open to the public which can also avail of a guided tour. Artefacts used over the centuries by the royal family are displayed in a museum here. The Swathi Sangeethotsavam is held at the palace in January every year.

At Pazhavangadi Ganesha Temple, the deity is shown sitting with right leg folded over the left. To be noted at the temple are 32 sculptures of Ganesha in different poses. This temple is maintained by the Indian Army as its predecessor in the area, the Travancore Army, used to maintain the temple earlier. Goddess Durga and Nagaraja are also worshipped here.

Rangavilasom is another palace inside East Fort and was the residence of Maharaja Swati Tirunal. Also built in the traditional Kerala style, Visitors can check out a photo gallery at the palace which displays photographs taken by Uthradom Thirunal Marthanda Varma of the House of Travancore over 70 years. Plans are afoot to house a reference library on the history of Travancore here.

In front of East Fort, Gandhi Park has been renovated and is popular with the many visitors to the fort, especially in the evenings when it provides a vantage point to view the illuminated entrance to the fort.

Located along the street which leads to East Fort, Chalai Bazaar is where the people of Thiruvanathapuram come to shop for anything from a pin to jewellery, fruits and vegetables and hardware and textiles. The entire street and its by lanes are crammed with shops and vendors selling a whole host of goods and commodities.

Location: On M.G. Road.
How to get there: East Fort is close to the Central Bus Depot and Central Railway Station.
Timings: 9 am – 8 pm.