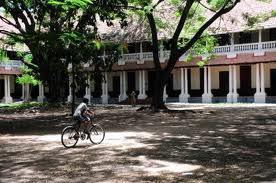 The main court complex is located at Vanchiyoor in Thiruvananthapuram. The new court complex was first proposed by District Judge Rajendra Babu but completed only in 2010. It houses the offices of all seven Magistrates, the Motor Accident Claims Tribunal and the Family Court. Video conferencing facility is available here. Day-to-day functioning has been streamlined with a host of IT initiatives, making it easier for litigants, advocates and the general public to access information. The Principal District and Sessions Court in Thiruvananthapuram plays a pivotal role in the state’s judicial system which has its High Court in Ernakulam.

Additional Sessions Courts are located in Thiruvananthapuram and Neyyattinkara. They have jurisdiction over civil cases.

Assistant Sessions Courts are located in Thiruvananthapuram, Neyyattinkara, Attingal and Nedumangad. They have appellate powers over judgments of the Munsiff Court.

Chief Judicial Magistrates are present in Thiruvananthapuram, Neyyattinkara, Nedumangad, Attingal and Varkala. They deal with criminal cases under the Criminal Procedure Code and can impose a prison sentence of upto three years and fines upto Rs 5,000.

The Family court is located in Thiruvananthapuram and presided over by a District Judge. It has jurisdiction over all types of cases pertaining to section 7 of the Family Court Act.

Munsif Courts are located in Thiruvananthapuram, Neyyattinkara, Nedumangad and Varkala. They have all the powers of a Judicial Magistrate of the First Class and can dispose of criminal cases.

The Motor Accident Claims Tribunals, Cooperative Tribunal, University Appellate Tribunal and Tribunal for Local Self-Government Institutions are all headed by a District Judge and deal with appeals and revisions.