The backwaters of Thiruvananthapuram are part of the vast network of lakes and canals that stretch from Kochi’s Vembanad Lake upto Thiruvananthapuram’s Vellayani Lake and includes Aakkulam Lake, Veli Lake and the backwaters at Thiruvallam, on the edge of the city. Most of these backwaters are formed by tributaries of the Karamanna and Killi rivers and are functioning ecosystems in their own right. They were formed long ago by the action of waves and currents, creating a unique ecosystem with fresh water and sea water and are brackish in nature. They abound in aquatic life with fish, frogs, crabs, otters and turtles as well as a variety of birds. On their banks grow coconut palms, pandanus shrubs and various other plants. Boats called kettuvallams ply these backwaters ferrying people and goods from place to place. Many of them have been converted into houseboats for tourists. 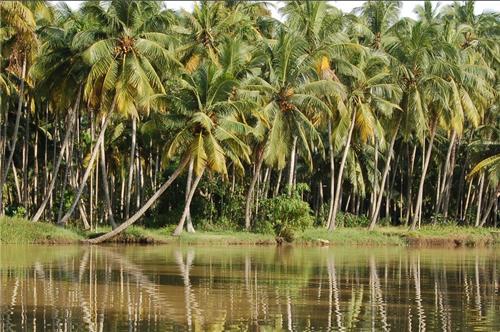 The Karamanna River flows through Thiruvananthapuram after originating near the Agastyakoodam Peak in the Western Ghats. It enters the city at Nedumangad and after flowing through it meets the Arabian Sea at Panathura near Kovalam. The river’s main tributary is the Killi.

Veli Lake is part of the larger Aakkulam Lake just outside Thiruvananthapuram. Giant sculptures of sea shells and other figures set in lush landscaped gardens, filled with palms and other tropical trees, are its main attraction and include that of a mermaid lying on her side in a giant oyster shell. A variety of birds are resident here. A floating bridge connects Veli Lake to Sanghumukham Beach.

Located about 10 km from the heart of Thiruvananthapuram, Aakkulam Lake is famous for its placid backwaters and variety of birds and acquatic life. Aakkulam Tourist Village is another attraction here. Developed on the lines of the Veli Tourist Village, it lies on the shores of the Aakkulam Lagoon and has landscaped gardens and offers facilities for swimming and boating too. There is a children’s park with a paddle pool too. The Southern Air Command of the Indian Air Force is also located here. 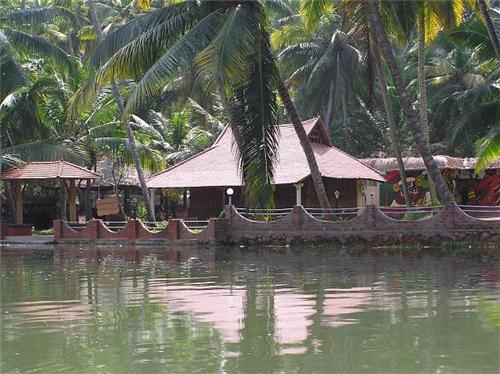 Photo Source
Vellayani lake is the largest fresh water lake of the area. In fact, it's name means just that in Malayalam. It is located on the way to Kovalam. A road, constructed on a bund, passes through the lake. During Onam, snake boat races are held here. Hundreds of big and small boats vie with each other to lead the race with thousands of people cheering them on from the shore.

The karamanna and Killi rivers meet at Thiruvallam, south of the city centre, creating another backwater stretch. Edayar Island lies in the centre of the backwaters at Thiruvallam. It is 2 sq km in length and half a km in width and is connected to the mainland by a bridge. A temple and church are located here. On the opposite bank is an ancient Parasurama temple, believed to date to the 12th century and the only one of its kind in Kerala. Edayar Island is an ideal getaway for a few hours of picnicking or bird watching.